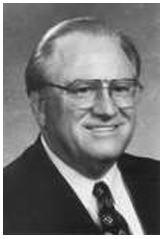 Rev. Armon Newburn was elected Superintendent of the Oklahoma District Council of the Assemblies of God in October of 1983 where he served until December 2000, following a pastorate of more than 17 years at Woodlake Assembly of God in Tulsa, Oklahoma. In this position Rev. Newburn was overseer for 490 churches and 1300 ministers in Oklahoma. Previously, he pastored churches in Muldrow, Duncan and Wister, served as District Youth President for approximately four years, Assistant Superintendent for three years, and Executive Presbyter for the Oklahoma District for thirteen years.
Rev. Newburn has earned two Bachelor Degrees, a Masters Degree, in 1980 was awarded a Doctor of Letters Degree, and in 1993 was awarded a Doctor of Divinity.
Under his leadership, Woodlake Assembly of God became one of the strongest Assemblies of God churches in Oklahoma, and in 1982 ranked number 7 in total missions giving out of 10,000 churches across the nation. At Woodlake, he developed a multiple staff, a wide range of church and community ministries and a day school. During his tenure as Pastor, the congregation relocated and erected beautiful new facilities for Worship and Christian Education.
Rev. Newburn served as Chairman of the Board of Regents for Southwestern Assemblies of God University in Waxahachie, Texas from 1994-2000, as a member of the Executive Board for Evangel College in Springfield, Missouri, 1978-2000, and as a member of the Board of Regents for American Indian College in Phoenix, Arizona, 1986-2000.
Rev. Newburn served as a General Presbyter to the General Council of the Assemblies of God since 1980. In August of 1993, at the General Council in Minneapolis, Minnesota, he was elected to serve as Executive Presbyter for the South Central Area for the General Council of the Assemblies of God and served this position until December 2001.
Brother Newburn entered his heavenly rest on March 7, 2010 at St. Francis Hospital in Tulsa, Oklahoma. He was 77 years of age.

The Pastor and His Family

Playing by the Rules

The Church at the Crossroads

Make Jesus the Lord of Your Life

Heirs of Past, Guardians of the Future

Wild Oats and the Harvest

Be the Best You Can Be