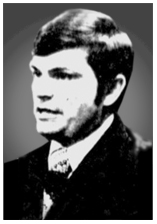 Robert Bartlett is the founding pastor of Living Water of the Valley Church in Phoenix and has served the congregation for twenty-five years. Bob has been in the ministry for over fifty years. He has traveled to many countries of the world in crusades, and teaching seminars. Before coming to Phoenix, he traveled with his wife and children for six and a half years and are the founders of a very important missionary outreach, "KIDS International." They took young people to third-world countries for a week of missions on the streets, in the parks and in local churches in the evenings for ministry. Many young people received their calling to full time ministry on these trips, and are now missionaries all over the world.

He and wife, Ona, also preside over "Living Water International," a worldwide organization reaching ministers with fellowship and training, bringing the body of Christ together in a special and loving way. Their other organization, "Redeem A Child," was a sovereign move of God to rescue slave children in the Sudan. To date, they and their partners have purchased over 1500 children from the Muslims, and returned them to the safety of their parents or Christian orphanages.

In the 1970's Bob served as director of Teen Challenge in Philadelphia. The popular book, The Soul Patrol, told the story of the successful ministry.

Is There Not a Cause

The Day God Got Lost

The Tabernacle of David

Used by permission of Bob Bartlett.