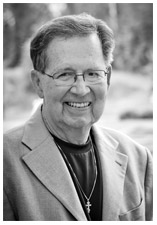 Charles Carrin's ministry spans the final half of the twentieth century and into the twenty-first. He was ordained in 1949 and in his youth traveled with men who preached in the 1800's. For the first twenty-seven years of his ministry, Charles was a hyper-Calvinist Baptist pastor and Presbyterian seminarian who denied the miraculous works of the Holy Spirit. Mid-way in his ministry that abruptly changed. Personal crisis forced him to acknowledge Scriptures he had previously ignored. It was a time of intense pain and testing. The truths he saw were frightening; they had power to destroy his denominational ministry and at that point he had no hope that another, more wonderful ministry awaited him.

As a result of his submitting to God in that crisis, Charles emerged with an amazing anointing of the Holy Spirit. Today, his ministry centers upon the visible demonstration of the Spirit and imparting of His gifts. This new ministry has taken him to London's Westminster Chapel, the Toronto Airport Christian Fellowship, and other significant places. He, R.T. Kendall, the former, 25 year pastor at Westminster Chapel, and Jack Taylor, former Vice President of the Southern Baptist Convention, travel together holding "Word, Spirit, Power, Conferences."

As an evangelist/writer, Charles' articles have appeared in major Christian magazines in the United States and abroad. He travels extensively, teaching believers how to operate in the power of the Holy Spirit.

The Power of the Holy Spirit

Used by permission of Charles Carrin.