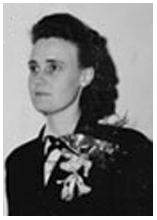 Daisy Marie Washburn Osborn, who along with her husband, T.L., set up a Tulsa missionary church as the base for a ministry which saw them preach in 73 countries. Mrs. Osborn grew up in California and attended Zoe College in Jacksonville, Fla.

In 1942, she married T.L. Osborn. Six years later, the two set up the Voice of Faith Ministry Inc. The name was later changed to the Osborn Evangelistic Association, now OSFO International.

Mrs. Osborn directed overseas evangelistic, educational and humanitarian programs for the church. She also wrote five books, was the host of a radio program and spoke at numerous conferences. Osborn often spoke about women's roles in the ministry.

In 1987, she became the first woman evangelist to minister in New Guinea. She helped organize a woman's congress in India where more than 6,000 women discussed their relationship with God.

Her message was that in Christ, there is total equality. The Osborns in their treks across the world met with many church and government leaders. In 1974, former Ugandan leader Idi Amin once ordered his helicopter to stop at a Kenyan crusade that the Osborns were conducting. Amin then invited the couple to preach in his country.

In 2912, the Osborns gave their Skelly center offices and museum, valued at $10.8 million, to Billy Joe Daugherty and his Victory Christian Center. T.L. Osborn said at the time that the couple wanted to intensify their ministry to conduct more overseas crusades.

The New Woman for the New Church – Part One

The New Woman for the New Church – Part Two

When Women Are Winners

Used by permission of LaDonna Osborn.