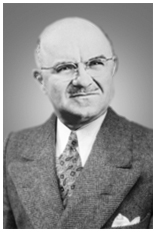 Edgar Wendell Bethany was born on July 17, 1904 in a log cabin in Mississippi. Bethany was saved in 1921. In 1925 he left an accounting job to join an evangelistic team, doing everything from singing, to praying to driving tent stakes. He was ordained with the Assemblies of God in 1927.

Bethany pastored churches in Spartanburg, SC and Columbus, GA. He served the Assemblies of God in many capacities, including executive presbyter.

Brother Bethany helped to establish South-Eastern Bible Institute (now Southeastern University, Lakeland, Florida) in 1935 and was one of the school's first faculty members and the school's principal. In his later years he was known around the world as a campmeeting, convention and council preacher.

Edgar and his wife Laurie were the parents of Jan Crouch, co-founder of the Trinity Broadcasting Network.

Departing from the Truth

Draw Nigh to God

Facing Your Own Failures

Keys to the Kingdom

Let Everything that Has Breath Praise the Lord

Let Me Show Your Strength and Power

Notes from the World’s Greatest Soldier

Run and Speak to this Young Man

The Blessing of Beginning Again

The Language of the Blood

The Power of Praise

The Well of Salvation