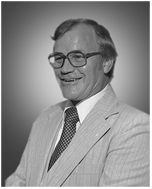 Dr. Brummett was ordained as an Assemblies of God minister in 1953. He earned a Bachelor of Arts in Religion from Southwestern College, Oklahoma City, and a Master of Arts from Bethany Nazarene University. He received an honorary Doctorate of Divinity from SAGU.

Dr. Brummett served as chairman for the Department of Christian Ministries at SAGC, teaching Bible and Theology until July 31, 1978, when he succeeded Dr. Blake Farmer as president. He served as president of SAGC from 1979-1982, He is remembered fondly for his dedication and commitment to the college's students. He was awarded the Honorary Alumnus Award at SAGU Homecoming in 2004.

Dr. Brummett and his wife pastored churches throughout Arkansas, Oklahoma, South Carolina and Minnesota before retirement in 1995.

A Man of Dignity

A Man of the Word

A Man of Prayer

Profile of a Man of God

Used by permission of Jim Brummett.