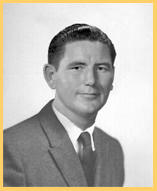 James Donnell Brown  was born October 30, 1930. He grew up in Alabama, and although his ministry would later take him throughout the world, he always had a sense of gratitude for his southeast heritage.


Dr. Brown served as President of Southeastern University from 1968 to 1970. From 1983 to 1986 he served as Executive Vice President of the Assemblies of God Theological Seminary.

In the mid-1980s Brown led First Assembly of God in New Orleans. At the time First AG was one of the largest congregations in the Assemblies of God fellowship.

The Ministry We Have Received