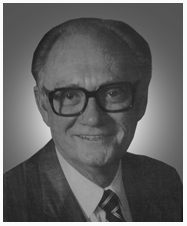 Laurell Akers started his ministry as an evangelist in the 1950's in South Texas. He was elected as the first D-Cap of S. Texas in 1956 and served until 1970. He literally mentored hundreds of young preachers. The most famous was David Roever. He developed camping in S. TX from its infancy to become on of the finest programs in the country.

Akers never married, giving himself totally to the work of the Lord.

In In 1970 he was elected pastor of Glad Tidings AG in Houston, Texas and led the church in 3 building programs during 20 years of pastoring with great growth.

Retiring in 1990 he entered a third ministry, preaching funerals through the Klein Funeral Homes of Houston. He said he had won more people to Christ through this ministry than in all his years of as a pastor.

Brother Akers went to be with his Lord and Savior September 18, 2008.

Birds of a Feather

Occupy Until I Come

What One Thing Do You Lack?

Used by permission of Janice Akers.