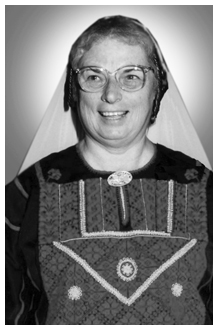 Margaret Gaines was born in 1931 to former missionaries to Japan. She was an eleventh generation missionary on her mother’s side. Margaret’s parents had returned home for lack of financial support, and her father pastored a small congregation. They bathed their home in prayer and mission discussions. When Margaret was nine, her mother died.

At age 14, Margaret made a full surrender of her life to Christ at the Sixteenth Street Church of God in Anniston, Alabama. The next night, she was baptized in the Holy Spirit. The infilling of the Spirit created in Margaret a hunger to study the Word of God and an intense desire to pray and follow the leading of the Spirit. She enrolled in the Church of God Bible Training School in Sevierville, Tennessee, and graduated from Lee Academy in 1941 and Lee Junior College in 1951 in Cleveland.

Josephine Planter, a veteran missionary to Tunisia, spoke during the 1946 Missions Week at Lee. She emphasized that she was 79 years old and had no one to assist her and replace her in the mission work to Arabs. Planter appealed for volunteers. Margaret could not escape the message. Responding to a call to prayer on Sunday evening, she begged God to call missionaries. The Holy Spirit spoke to Margaret: “You have no right to ask that others be sent unless you give Me the chance to turn you down.”

“Oh, God,” Margaret cried, “if I’m fit material for the mission field, do please send me.” God assured Margaret He had chosen her as His representative to the Arabs.

When Margaret met with the World Missions Board for an appointment to Tunisia, they declined to send her, because she was young and single. She was deeply disappointed and returned home to Anniston. While seeking God, Margaret felt compelled to go to Tunisia on her own. On March 25, 1952, she secured an airline ticket to Tunisia, North Africa, and left home with $100 in her pocket.

For one year, Margaret worked with Planter. During the next nine years, she planted the Church of God in Tunisia, evangelized the people, and taught the new disciples. Because of Margaret’s diligence, the World Missions Board gave her a missionary appointment in 1956. After 10 years in Tunisia, political turmoil and health issues forced Margaret to leave for France.

Margaret briefly located to Troyes, France, for recuperation and assisted missionaries Walter and Bobbie Lauster in church planting. In 1964, she responded to a need and was appointed as a missionary to Jerusalem. Margaret taught students at the Church of God on the Mount of Olives and in the summer of 1965 was involved with the establishment of the Middle East Theological Institute. She served in various capacities: house mother, teacher, accountant, and cafeteria manager.

Later that year, Margaret visited Aboud, a small village of olive and almond trees, 33 miles northwest of Jerusalem. She started a weekly Bible study for the children. Because of the interest, Margaret moved to Aboud where she taught three days a week. For four days each week, Margaret taught in Amman, Jordan.

In 1969, Margaret planted a church in Aboud in rented facilities and became the pastor. She also started a school. Margaret drew plans for school desks, benches, and chalkboards. The school was officially opened in August 1970 as the Aboud Elementary School. Three years later, Arlene Miller, an educator from Ohio, joined Margaret as a teacher, and a new school building was constructed.

In 1983, Margaret resigned from the school to spend full time in church work, and Arlene became the principal. Arlene served until 1993 when the school was staffed completely with nationals. The school continues to grow and provides training for elementary, middle, and high school students. Additional land was purchased in 2014.

Margaret continued her education on furlough and earned her bachelor’s degree from Lee University in Biblical Studies and a master’s degree from the Pentecostal Theological Seminary.

In 1995, Margaret started a day care center on the Mount of Olives property in Jerusalem. Because of health reasons, she moved to Alabama in 1996, having served on the mission field for 44 years.

For the next 14 years, Margaret continued her ministry with the people of Aboud through building projects, fundraising, and advisory leadership. After serving in missions for 58 years, she became pastor of the Church of God in Wattsville, Alabama (2010-14).

Margaret has authored three books: Of Like a Passions, Small Enough to Stop the Violence, and Meditations on the Advent Wreath.

Margaret has received numerous awards in recognition of her dedicated ministry: the Spirit of Azusa Award in 2011, the first Circle of Global Impact Award in 2014, and the Lee University School of Religion Distinguished Alumnus in 2015.

On Sunday evening, November 19, 2017, Margaret Gaines went to sleep in her home in Pell City, Alabama, and awoke in her heavenly home.

Profile of a Missionary

Margaret Gaines was not married and had no heirs. It is assumed this sermon is in the public domain. If you have a copyright claim to the sermon please contact us. Thank you.