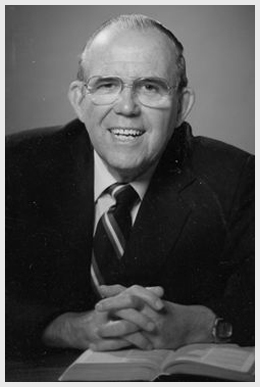 "Anyone who ever prayed with Mark Buntain would never forget it; he was a weeping prophet whose heart must have been continually hurt with the pain of India."

Mark's father pastored a large church in Winnipeg, Canada before moving to Toronto to become the General Superintendent of the Assemblies of God in Canada

In 1953, Mark heard the Lord tell him he would go to India. Fifteen months later he and Huldah, his wife received a letter asking them to go to India for one year of evangelistic services.

In 1954, Mark, his mother and wife headed for India aboard a ship departing from New York. Upon arrival a number of weeks later, they began services every night in a large tent on an open piece of strategically placed land. But, monsoons soon made it impossible to continue tent services. The trio found a large hall to rent above a nightclub on the main street, a miraculous discovery in such a congested city. Many joked that it was "hell downstairs and heaven upstairs."

Their congregation grew at the nightly services and they soon decided to construct a church. However, in a city of 14 million people only 7 miles long and four miles wide, land was a premium. The only property available was where they held the tent meetings, but a Muslim family owned it and refused to sell. Mark continually visited their family and built a strong relationship until one day the grandfather informed Mark, "My family is not in favor, but I am going to sell you the land." Two years later, the first church to be constructed in Calcutta in one hundred years was dedicated on Christmas Sunday, 1959, on that very property.

One night during a tent service, a beggar walked in and screamed, "Preacher, feed our bellies and then tell us there is a God in heaven who loves us." He spoke to the Buntains hearts and inspired them over the following years to develop a series of compassionate ministries all across the city of Calcutta.

Mark loved the poor. It didn't matter if they wore tattered clothes, were alcoholics, drug addicts, or lived on the street. He loved them and ardently believed that helping them fulfills Christ's commission and follows the example he set.

After 1959, the church had phenomenal growth, but the missionaries were concerned about the poverty-stricken families and their children without education. Yet, there was no the money to obtain land or construct a school. One day, Mark received a phone call from the hospital. His Muslim friend had become very ill and wanted to see him. As Mark knelt by his bedside, the elderly man faintly whispered, "I have told my sons, if I die, to make sure you have the first option to purchase the property behind the church to build your school." A few days later his sons called and offered Buntain the purchase of the land. However, he had no money and a limited amount of time to make the decision.

Mark called a prayer meeting and God provided. The Buntains dedicated their first school in January 1964 with 200 children enrolled.

The Buntains wanted to extend the compassionate ministries for the poor of Calcutta, but the questions remained "where" and "how?" Mark noticed a vacant cemetery being used as a soccer field near the church and school buildings on one of Calcutta's main streets. After inquiring, he discovered it was an old British cemetery that had not been used for over 100 years. Miraculously, the city granted us a ninety-nine year renewable lease for the nearly four square blocks of land.

First, God miraculously provided for the building of a hospital. After constructing the medical facility, they built a large school complex and nine-story office building on the property. Today, the school is the Assembly of God Church School and the office building is known as AG Towers. The office building houses a medical clinic, pharmacy, nursing school, church offices, in addition to renting space to other companies to provide income for the hospital, feeding programs, and other charitable ministries.

Mark died in June 1989 of a cerebral brain hemorrhage. The media reported that over twenty thousand people attended the funeral service as well as hundreds standing on roofs of surrounding buildings and the street in front of the mission. Today the Buntains' ministry of compassion continues through his wife and their daughter, Bonnie.

Used by permission of Huldah Buntain.