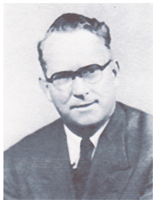 When he was six years old, his father died, leaving the family in extreme poverty. His early life was spent in the swamps of New Jersey. Later, she moved the struggling family to Atlantic City where she worked as a "washer woman" where she would do a load of clothes for ten cents and iron them for another nickel. These were tough times.

Thanks be to God, in this difficult period of their lives, Mary Catherine Trotter was introduced to Pentecostal and led her family into the Spirit-filled life.

At fourteen years of age A N was working twelve hours a day, seven days a week to help his impoverished family. At that age he also received the baptism in the Holy Ghost.

From that time, he felt a call to preach and attended Beulah Heights Bible School and Missionary Training Institute. At the school he met his wife, Blanche Matilda Garlock. Blanche had already served a missionary term with her brother Henry B. Garlock. In 1921 the Trotters sailed for West Africa to be Assemblies of God missionaries.

The couple returned to the states for a season, entering into pastoral and evangelistic work. Trotter pastored in nine different states. For more than a decade he was the most sought after camp meeting speaker in the United States, preaching at more Assemblies of God camp meetings than any other minister. He preached the General Council of the Assemblies of God, many District Councils and frequently spoke at the Regional prayer and Bible Conferences.

Trotter returned to Africa regularly to do missionary evangelism. He taught at the South Africa Assemblies of God Bible College, was a guest professor at North Central Bible College and was a teacher at Ozark Bible Institute.

After Blanche died in 1972, Trotter made his home in Rialto, California. On his way to preach several meetings in Missouri, on November 1, 1982 he stopped in Dallas to see H. B. Garlock who was ill. Trotter suffered a heart attack as he stepped off the plane and went to be with Jesus the next day.

Trotter was a true giant of the faith. Many said he was the greatest Pentecostal preacher of his day. He was not a sh.mp3n, nor one to revel in oratorical acrobatics, but with a real grasp of the truth of the word of God, he was able by the power of the Holy Ghost within him to make the things of God and Jesus Christ very real to the hearts and lives of the listeners.

Brother Trotter was buried in Springfield, Missouri, celebrated by dozens of officers from the Assemblies of God. At his request, all joined in the song:

"Death hath no terrors for the blood bought one,

Oh, Glory Hallelujah to the Lamb.

The long fought victory o'er the grave is won,

Oh, Glory Hallelujah to the Lamb.

Jesus rose, from the dead, rose triumphant like He said.

Snatched the victory from the grave,

Rose again our souls to save!

Oh, Glory Hallelujah to the Lamb"

A N Trotter's influence for God, the truth and Pentecost is almost immeasurable.

Accepted in the Beloved

An Abiding Place in Christ

The Gospel in the OT – Samuel

The Gospel in the OT – Saul

The Interuptions of God

You can order many of Brother Trotter's sermons at:

Used by permission of A R Trotter.