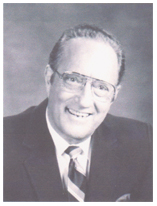 Alfred Robert Trotter was born July 29, 1932 to Rev. A N Trotter and Blanche Melissa Trotter. Because his parents moved frequently in their ministry, he grew up in six different states. After WW II the family settled in Oklahoma where A.R. attended high school. While still a teenager he joined his parents, doing missionary work in West Africa.

He was saved at the age seven and baptized in the Holy Ghost and called to preach at age nine. He preached his first sermon when he was fourteen.

Trotter is an accomplished cornet player and won several solo contests as a young man.

During more than sixty years of ministry Alfred Robert has served as an evangelist, missionary, Bible school teacher, pastor, chaplain, Teen Challenge president and camp meeting and convention speaker. He also had many years of radio and television ministry.

Since retiring from full time ministry, A.R. and his wife Vivian live in the Dallas area. He continues to speak in churches and publishes a monthly paper, "The Trumpet Call" and a publication for ministers, "Special Sermon Series."

Brother Trotter is noted for his adherence to the "Faith, once delivered to the Saints." He says, "The race is not to the swift, nor the battle to the strong, but him that endureth to the end, the same shall be saved!"

The Ark of the Covenant

There Is a Lifting Up

The Blood and the Anointing

Whose Fan Is In His Hand

In Him Was Life

You can order many of Brother Trotter's sermons at:

Used by permission of A R Trotter.