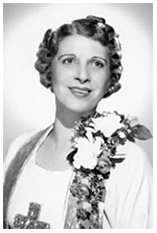 Aimee Semple McPherson was born October 9, 1890. She was well known as Sister Aimee or simply Sister. She reached the heighth of he popularity in the 1920s and 1930s.

Aimee is also famous for founding the Foursquare Church. She has been noted as a pioneer in the use of modern media, because she used radio to draw on the growing appeal of popular entertainment in North America and incorporated other forms into her weekly sermons at Angelus Temple, one of the first megachurches.

In her time she was the most publicized American evangelist, surpassing all her predecessors. She conducted public faith healing demonstrations before large crowds; testimonies conveyed tens of thousands of people healed.

McPherson's preaching style, extensive charity work and ecumenical contributions were a major influence to the Pentecostal/Charismatic movement in the 20th century.

Sister died from a freak overdose of prescribed medicines on September 27, 1944.

This Is My Task