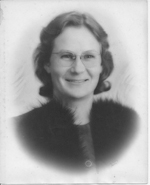 A preacher in her own right, Anabel Manley found her consuming joy and destiny in life as a minister's wife. An ordained minister, she was the head counselor in the South Texas District Assemblies of God youth camps for ten years. After the death of her husband, Quinn, in 1970, she served as the District Women's Ministries Director from 1971 to 1978.

*The audio is poor for this sermon, but Mrs. Manley's sermons are rare and this is an important subject.