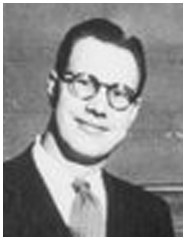 B. Owen Oslin reached the height of his ministry at First Assembly of God in Fort Smith, Arkansas where he faithfully ministered for 20 years and the church grew to be one of the largest in the state.

He graduated from Hominy, Oklahoma High School as a valedictorian and Senior Class president. He attended college at Southwestern Bible College, Phillips University and Dallas Theological Seminary where he earned his doctor of theology degree. He preached his first sermon in 1939.

He pioneered Christian Television in 1952 on local Channel 5 with live weekly telecast until 1968. He was very active in many civic, governmental and religious organizations in Fort Smith, as well as the state of Arkansas. He was guest lecturer at a great number of colleges and universities in the United States. B. Oslin was in demand as speaker at camp meetings, denominational churches, conferences and crusades, both in America and in foreign countries.

B. Oslin founded Christian Centers International in 1968, a Ministerial Fellowship for ministers, churches and organizations. During his last 20 years, B. Oslin and Barbara, his wife who survives him, traveled together in Missionary Evangelism in 42 states and 15 foreign countries, logging thousands of air and cross- country miles. Their last major project was establishing churches and ministries in Russia.

Those fortunate enough to hear Oslin preach often described him as the best orator they ever heard.

Marvin Schmidt describe him like this "Hearing him as a youth, he was the main speaker at camp meetings in Oklahoma and Southern California. Brother Oslin pastored a church in Fort Smith, Arkansas. I vividly remember his messages on 'To Wander or to Wonder' and 'The Glory of God.' His powerful preaching ministry stirred me to seek for God's presence in my life as no ever has."

After a lengthy illness, B. Owen Oslin entered into heavenly rest on November 14, 2001.

Give Us This Day Our Daily Bread

Holy Ghost: The Kingdom of Power

The First and Lasting Miracle

The Glory of the Lord

The Manifestation of the Sons of God

The Miracle of Energetic Prayer

The Tri-Unity of God

What the Spirit Sayeth

Used by permission of Carl Riggins and Barbara Oslin.