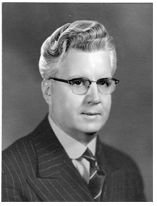 Peterson was converted at a revival meeting at the Assembly of God Church in Casino, Minnesota. James Menzies, the evangelist, brought a tent to Casino and preached under severe persecution. Fireworks were thrown at the tent and acid was poured on it. Residents posted signs reading, “Holy Roller Camp Meeting” and “The Devil Is Here.” In spite of the persecution fourteen year old Bartlett and several others were saved and baptized in the Holy Ghost.

Bartlett began full time ministry as an evangelist in 1927. He was ordained by the Assemblies of God in 1928.

Peterson served the Lord and the Assemblies of God as an evangelist, pastor and administrator. He pastored in Sauk Center Minnesota and Sisseton, South Dakota. While pastoring in Sisseton in 1930 Peterson became one of the first Assemblies of God pastors to use radio as a tool to preach the gospel. Later in his career he would be the featured speaker for the national Revivaltime radio ministry for a year and continued to serve as the executive director for the broadcast.

Peterson returned to itinerate ministry and traveled though most of the United States before settling in Fergus Falls, Minnesota. In 1940 he was selected as field secretary for the district and then served as district superintendent.

When Central Bible Institute was established in Springfield, Missouri, Peterson was tapped as the first full-time president. He served the school for ten years before being chosen as General Secretary of the Assemblies of God, a position he held from 1959 to 1975.

Brother Peterson met the Lord face to face on September 7, 1988.

The Creator Needs the Creature

Used by permission of Wilson Peterson.