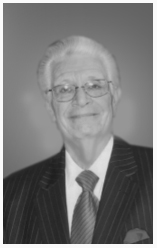 Billy Martin has pastored First Assembly of God in Guymon, Oklahoma since October 1990. He serves as the presbyter of his section and has since 2001.

Billy has pastored churches in Oklahoma, Arkansas, Tennessee and New Mexico. He also served as a presbyter in New Mexico. He spent fourteen years as an evangelist.

Brother Martin was saved and called to preach fifty-seven years ago and has faithfully fulfilled that call. A versatile minister of the gospel, he has preached Camp Meetings for fourteen Assemblies of God Districts and has also preached Missions Conventions and even Women's Ministries conventions.

He Paid a Debt

I Must Go Through Samaria

What Sort Are You?

Used by permission of Billy Martin.