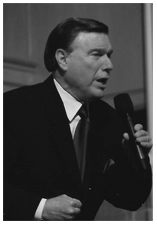 Bob Nichols was born and raised in the fires of revival.  Before he was born, his Northern Baptist Grandmother traveled from Greenwood, Mississippi to Houston, Texas on business.  She saw Raymond T. Ritchey’s newspaper advertisement proclaiming Salvation, Healing and Holy Ghost!  Out of curiosity she attended one of the meetings and was saved, healed and filled with the Holy Spirit with the evidence of speaking in other tongues.  She shared her newfound salvation, healing and Holy Spirit Baptism with Bob Nichols’ mother, Jewel Nichols, who was attending The University of Texas at Austin.  Later Jewel married R.V. Nichols, a prominent attorney in Fort Worth, Texas.

Jewel Nichols would take young Bob with her as she pursued revival.  They attended a revival church in Fort Worth pastored by Carl Alcorn.  It was at this church that young Bob heard leading evangelists and faith teachers such as A. A. Allen, David Nunn, Tommy Hicks, and Kenneth E. Hagin.  There were many trips from Fort Worth to Dallas to hear Dr. Gordon Lindsey and many of the Voice of Healing Evangelists.

Bob Nichols received his call into the ministry under the gospel tent of Dr. Oral Roberts in Fort Worth.  He started preaching when he was 18 years old and after a serious automobile accident he entered full time ministry.  Then Bob and his wife, Joy, traveled with Dr. Gordon Lindsey and leading evangelists of that day.  His father in law, Pastor J. C. Thompson, pursued revival in his pastorate at Faith Temple in Fort Worth.  Bob Nichols was ordained by the Assemblies of God in 1959.

Many revivals occurred through Pastor Nichols ministry at Calvary Cathedral International including the “Jesus Hippy” revival in the early 1970s, a revival of joy, souls saved and Pentecostal fire that shook the entire Metroplex through the ministry of Dr. Rodney Howard-Browne in the 1990s, a revival of prayer with revivalist Dale Gentry in the 1990s, a revival of repentance in the late 1990s with Evangelist John Davis, and a soul winning revival that resulted in over 12,000 soul winners praying the prayer of salvation with more than 130,000 people from 2012-2019.

In 1979, Pastor Bob and Joy Nichols founded Calvary Christian Academy, a Pre-school through Grade 12 Christian school.  Pastor Nichols pursuit of revival led him to sow seed for a Bible College as he taught at Pastor Bob Tilton’s Word of Faith Bible College in Dallas.  He then started Calvary Cathedral Bible College in 1981 which has raised up ministry workers serving in all parts of the world.  In 1995 Dr. Bob Nichols founded Lighthouse Television in Kampala, Uganda, East Africa.  Lighthouse Television has been broadcasting the Gospel of Jesus Christ 24 hours a day, 7 days a week, since July, 1997 with many millions of people under its signal.

Pastor Nichols has provided spiritual oversight serving as Pastor and President of Calvary Cathedral International and its many ministries and outreaches including the daily Faith, Hope and Love radio broadcast which has spanned fifty years.

Pastor Nichols has a passion for strong, family, faith, word-based churches and a heart to see spiritual revival in his city, nation and the world.  Pastor Nichols is also the author of several books including “Revival Now!”

Pastor Nichols has traveled the world calling for revival and his passionate plea for churches to witness, win and bring them in!  Churches must return to clear cut, salvation altar calls and America must have Holy Ghost, Book of Acts, revival!

Are You in the River?

All Because of a Prayer Meeting

Your Words Are Your Future

Thanksgiving Is Not Over

How A Praying Woman Changed Her World

Faith Builders In The Storms Of Life

Everything Begins With Prayer

Positioning Yourself for the Double Portion

Positioning Yourself for God’s Provision

Positioning Yourself for God’s Greater Blessing

But As for Me

Why I Believe In and Pursue Revival

The Power of a Faith Declaration

Behold, I Give You Power

How to Build a Storm Proof House

Why I Love the House of God

Our Purpose Is to Be Poured Out

You’ve Got the Power

Women on a Mission

The Cost of Winning

Now Is Christ Risen from the Dead

Our God of Change Is on the Move

Taking Back Our Cities for Christ

The God that Answers by Fire

How to Change Your Destiny

God’s Will Is Revival for Every Believer

Confessions of a Blessed Sheep

Be Strong in the Lord

A Praying Woman Who Changed Her World

A Passion that Possesses

A Lesson in True Greatness

A Father with a Fixed Heart

Seven Times More for the Rain

Five Reasons You Can Make It

Used by permission of Bob Nichols.