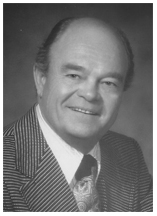 Carl Alcorn was actively engaged in ministry for more than 70 years. He pastored and built Oak Cliff Assembly of God in Dallas in the early 1940s. Other pastorates include Hemphill Heights Assembly of God in Fort Worth. His last service as a pastor was in Wichita Falls, where for 22 years he led the congregation of Evangel Temple in two building programs.

During the Wichita Falls ministries, Rev. Alcorn was on daily radio for 20 years. Along with his children (the Alcorn Trio) he led a weekly TV ministry for eight years.

His travels include ministry with Rev. David Wilkerson, author of "The Cross and the Switchblade" as well as many successful revival, crusades and campmeetings across America.

A Short Course in Human Relations

Religion with a Look, Lift, Leap and Life

Used by permission of Vera Alcorn and Jacquelyn Alcorn Guinn.