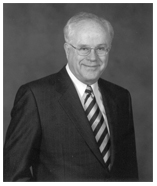 Born in Halifax, Nova Scotia, Canada, Crabtree was raised in Bangor, Maine. He graduated from Central Bible College in Springfield, Missouri, and received an honorary Doctor of Divinity from Northwest College of the Assemblies of God.

He began his ministry as an associate pastor in southern California and traveled as an itinerant evangelist from 1960-63. He pastored two leading Assemblies of God churches. In 1963 he was elected pastor of First Assembly, Des Moines, Iowa, and in 1974 assumed the pastorate of Bethel Church in San Jose, California.

In 1988, Crabtree was appointed national director of the Decade of Harvest, the most comprehensive and ambitious evangelistic and discipleship thrust in the history of the A/G.  He served his denomination as Assistant General Superintendent for 14 years.  In 2007, he accepted the presidency of Zion Bible College and served there until 2013.

Crabtree has travelled extensively in the U.S. and around the world as a convention speaker and frequent pulpit guest in churches.  He has authored seven books on subjects in theology, pastoral ministry, church development and discipleship.

Brother Crabtree graduated to his eternal reward on August 23, 2020.

A Man of God

A Recipe for Revival

Born to Win – Reborn by Love

Faith: A Biblical Truth and a Daily Practice

Getting Out the Weeds

How to Prepare Messages

Live the Word in Witnessing

Pleasing Him that Chose You

Redeeming Those on the Downward Road

Rightly Dividing the Truth about Lifestyles

The Bare Bones of Revival

The New Testament Version of an AG Minister

The Pentecostal Church of the 21st Century

The Truth Shall Make You Free

There Came a Group of Men

There Goes a Man of God

You Have Found Favor

Used by permission of Charles Crabtree.