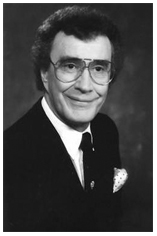 Dr. Sheaffer's preaching ministry began at the age of seventeen. When he didn't have a church to preach in, he would preach on street corners or use school facilities to hold revivals. He married his true love and life-long partner, Bonnie Rose Benson, in 1950, and together they pursued a very successful nationwide evangelistic ministry. Later they settled into their true calling and pastored several churches in Oklahoma.

Dan & Bonnie became pastors of First Assembly of God in Oklahoma City in 1969 with a congregation of 42 members. By 1972, a 1,250 seat auditorium had been built and outgrown, and then in 1979, Dr. Sheaffer led his congregation in building a new church complex that he named "Crossroads Cathedral." For 37 years, people accepted Jesus Christ as Savior in nearly every service.

Pastor Sheaffer and Bonnie hosted the popular Trinity Broadcasting Network program, "The Answer," for seventeen years and were frequent hosts and guests of TBN's "Praise the Lord" program. He was the author of two books of Bible questions and answers and a church growth book entitled, "Together We Grow."

After trying retirement for a short time in 2007, Dr. Sheaffer said, "I was called to preach!" and, along with Bonnie, founded Harvest Assembly of God Church in Oklahoma City.

Dan was joyously greeted in Heaven Thursday, September 2, 2010 by many thousands of souls who came to know Jesus Christ through his amazing 64-year ministry around the world

A Christian and His Money

An Example of the Believer in Faith

Because of Jesus, We are God’s Superman

Can God Count on You?

End of the World in Sight

Form but No Power

Full of Faith and the Holy Ghost

Give God a Chance

God Also Gets Sick and Tired

How to Be Successful

Kicking Down the Gates of Hell

Let’s Get on with the Business of Winning Souls

Losing Your Life for Jesus

Q and A – Building a Soul Winning Church

Scoffers and the Rapture

The Broken Hedge and Deliverance

The Cross Is to Die On

The Day Will Come

The Time of Thy Visitation

Things a Christian Does Not Have to Do

Together in Spiritual Commitment

Why Are My Prayers Not Answered?

Used by permission of Mike Sheaffer and Teri Sheaffer King.