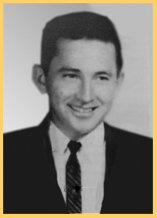 Darrell Louis Nunley was born to William and Myrrie Nunley in Logansport, Louisiana on October 15, 1933. Darrell was born on their family farm as the youngest of five brothers along with five sisters. He married the love of his life, Wanda Lee Kirby in Houston, Texas on September 4, 1953.

During the Korean War, they were stationed in Verdun, France from 1954 to 1956. They returned to Houston where they started a family and he began his career with CSX Railway Systems. He retired at 59 years of age due to health issues after serving 34 years as the Director of Sales. He was President of the Transportation Club of Houston for several years, and held various other positions in transportation industry associations. He birthed and was Pastor Emeritus of Healing Waters Fellowship in the Heights.

Darrell left his earthly home to live eternally with Jesus on March 28, 2016.

Digging the Well of Prayer

Building a Team for the Church

Why Is the House of God Forsaken?

The Power of Confession

Used by permission of Wanda Nunley.