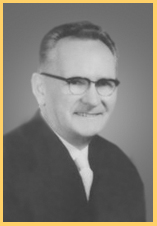 David Johannes du Plessis was born in South Africa in February 7, 1905. His parents were missionaries. David was converted at age 11 and baptized in the Holy Spirit at 13. As a young man, du Plessis met famed British evangelist Smith Wigglesworth. Wigglesworth prophesied that David would be a major catalyst of a Pentecostal revival in the traditional non-Charismatic denominations.

He was ordained by the Apostolic Faith Mission, a denomination founded by John G. Lake. du Plessis served the denomination in several capacities including General Secretary.

David continued in his work with the Apostolic Faith Mission until 1947 when he was asked to assume leadership of the new Pentecostal World Conference, an organization that sought to bring unity, fellowship, and encouragement to global Pentecostalism.

After moving to the United States in 1948 David served both the Church of God and Assemblies of God. He also became friends with John Mackay, the president of Princeton Seminary. This friendship opened doors for du Plessis to share the message of the Pentecostal outpouring with many global ecclesiastical representatives. These church leaders began referring to him as “Mr. Pentecost.”

When the charismatic movement began in the 1960s with many leaders in mainstream denominations experiencing the baptism in the Spirit and demonstrating spiritual gifts, including speaking in tongues, du Plessis was already in a place to provide leadership and instruction to ministers in the Episcopalian, Lutheran, Methodist, and Catholic churches. He was invited to participate in the World Council of Churches Assembly meetings and served as a Pentecostal representative at the Second Vatican Council. Although these relationships were controversial within the Pentecostal movement, du Plessis continued to extend a hand of fellowship to any who were willing to open their minds and hearts to the work of the Holy Spirit.

Then on November 9, 1983, David was honored with the Benemerenti Medal by Pope John Paul II, an award for outstanding service to all of Christianity. It was the first time this award had been given by the Roman Catholic Church to someone who was not a Catholic.

In his early days in South Africa he preached against the “dead, dry” religion of the mainline churches. In his later years, God used him to bring new life of the Spirit into those same mainline churches and to speak for unity among the Pentecostal global movement. When he died on January 31, 1987, at the age of 81, he was serving Fuller Theological Seminary in Pasadena, California, as resident consultant for Ecumenical Affairs and was an ordained minister of the Assemblies of God.

The Power of the Holy Spirit

Used by permission of Babette DuPlessis-Biddlecombe.