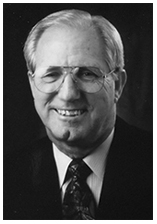 As a committed vessel for the Lord, Dr. Delmer Guynes left his footprint through his work as a missionary, pastor and former President of Southwestern. Looking back on his ministry, Dr. Guynes' complete devotion and reliance on the Lord would guide him through his time as a missionary during a period of isolationism in China and during his presidency at Southwestern Assemblies of God University.

With a heart for missions, he and his wife, Eleanor, accepted God's call into ministry in China until it became a closed country in 1949. However, when one door closed, God faithfully opened another for him to walk through in faith as the opportunity to minister in Malaysia presented itself to the Guynes.

Thirty years later, after years of serving in Malaysia and as Executive Vice President at AGTS,he and Eleanor learned that they would once again be able to return to China and continue the work that God had placed on their hearts.

Over the next 10 years, the Guynes developed Operation Sunrise, an international prayer program for China, and Sunrise Educational Foundation, a teacher placement program for Chinese universities and schools.

During his missionary appointment, he returned to SAGU to serve as the University's President from 1982 to 1984. He would later return to the United States in 1989 to work as a Missionary in Residence and he became SAGU's President once again where he would serve until his retirement in May of 2000. Under President Guynes' leadership, SAGU rebounded from a period of low enrollment and financial difficulty and achieved a record enrollment of 1,672 students.

The Greatest Love Story Ever Told

Used by permission of Delmer Guynes.