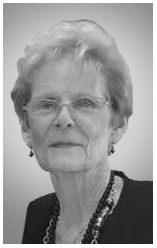 Rev. Dolores Hein began her ministry as a teenage girl and was ordained in the Apostolic Faith Ministry in Hempstead, Texas. She traveled and preached throughout the Central Texas area. In the 1980's she transferred her credentials into the Assemblies of God and was ordained by them.

She served many years as Pastoral Assistant in the College Heights Assembly of God, Bryan, Texas, and later pastored churches in Rockdale, Hearn, and Bryan, Texas. As a leader of Women's Ministries in the Bryan Section she traveled throughout the world into India, Middle East, South America, and Europe doing evangelistic and missions work.

She continues as a quality minister in College Station today filling pulpits as requests are received. Her ministry is highly sought among churches today as she is now in her upper 70's.

Before There Was a World

Committed to the Task

The Characters in the Christmas Story

Used by permission of Delores Hein.