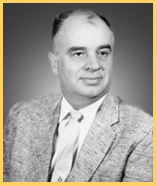 Donald Franklin Johns was born in Rochester, New York on May 28, 1922. He was ordained by the Southern Missouri District of the Assemblies of God. Dr. Johns was the primary writer of teen material for the Church School Literature department of the Assemblies of God and served the denomination in numerous positions. He also wrote a number of other books including Biblical Foundatons: Principles for the Pentecostal Believer and Developing the Expository Sermon.

Dr. Johns was the academic dean and dean of students at Central Bible College in Springfield, Missiouri. He was also served the institution as a professor of religious education and Bible. He was highly respected for his teaching and counseling of students. He had been on the faculty of CBC since 1952, dean since 1965. Before his death he was also teaching at the Assemblies of God Theological Seminary.

He was a member of the American Scientific Affiliation, the Evangelical Theological Society and the Religious Educations Association.

Used by permission of Greg Johns.