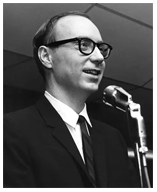 Dr. George O Wood was the General Superintendent of the Assemblies of God until his retirement in 2017. He served the denomination as General Secretary from 1993 to 2007.

Dr. Wood's parents were pioneer Assemblies of God missionaries to China and Tibet. George was born in China and has a deep love for missions.

Before coming to Springfield, Brother Wood was the Assistant District Superintendent of the Southern California District of the AG. Previously, he was the pastor of Newport Mesa Church in Costa Mesa, California for seventeen years.

Wood earned the Doctorate in Pastoral Theology from Fuller Theological Seminary and a Juris Doctor degree from Western State University College of Law. He was a member of the California State Bar.

Praying in the Spirit

The Chain of God’s Redemptive History

The Mark of a Messenger: Haggai

Your Life – Your Legacy