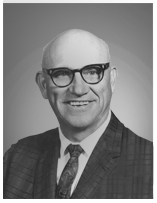 Emmett Ralph Foster was born August 19, 1907. He was married to Jo Ellen Wiley, the daughter of Opal Wiley who was with Charles Parham at the Topeka, Kansas revival that birthed the Pentecostal movement. Jo Ellen also attended the first General Council of the Assemblies of God in Hot Springs, Arkansas.

Foster pastored in Grand Island, Nebraska but most of his ministry was at First Assembly of God in Amarillo, Texas.

He was ordained in 1929 and served in both district and national offices for the Assemblies of God.

Casualties of the Ministry

God’s Gifts to the Church