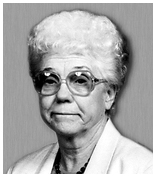 Elizabeth H. Zimmerman was the wife of former Assemblies of God General Superintendent Thomas F. Zimmerman and the daughter of Apostolic minister John L. and Elizabeth Price. Thomas was the assistant pastor in her dad's church where they met and married on June 17, 1933. That same year, the couple set out on what would become decades of ministerial service.

The Zimmerman's first served as part-time pastors at a church in Kokomo, Ind. The next year, they entered their first full-time pastorate in Harrodsburg, Ind., where they prayerfully managed to live on the $2.68 a week average offerings.

The Zimmermans were married 57 years before Thomas passed away in 1991. She was an active member of Central Assembly of God for more than 60 years. She also served on the Evangel University and Central Bible College women's auxiliaries.

Sister Zimmerman passed away March 18, 2008 in Maranatha Village in Springfield, Missouri after a short illness. She was 93.