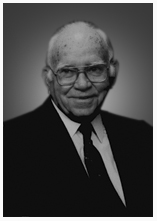 Estol R. Mason was born October 10, 1910 in Ft Worth, Texas, son of a train engineer. His mother died when he was 2yrs old. His first pastorate was in Madisonville, Tx. Pastoring there from 1941-1944. He also pastored in Stigler, Oklahoma and Haskell, Oklahoma.

He left college to return to Texas and pioneer a church in Franklin. and feeling led by the Holy Spirit to do so, he dropped out of college and he and his family headed to Franklin. The church planter bought a former German POW dormitory, moved it to Franklin and remodeled it into a church facility.

Later Mason pastored in Coleman and Hearne, Texas. His last pastorate was in Madisonville where his ministry began. He served as presbyter of the Bryan section for many years.