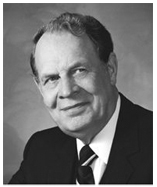 Guy Raymond Carlson was born in Crosby, N.D., on February 17, 1918. He made a public profession of his faith at age 7, began preaching at 15 and received his ministerial credentials at 16. Following high school graduation, he went to Western Pentecostal Bible College in Winnipeg, Canada.

Carlson began his pastoral ministry in 1940 in Thief River Falls, Minn., and was ordained in 1941. Three years later he was elected district presbyter and district Sunday school director. In 1948, he was elected superintendent of the Minnesota District of the Assembiles of God. At 30, he was the youngest man to serve any district in this capacity. He led the district until 1961, when he became president of the church's North Central Bible College in Minneapolis. In 1969, the college conferred on him the doctor of divinity degree. From 1969 until his retirement in 1993, Carlson served as an elected official of the General Council at the church's headquarters in Springfield. He was assistant general superintendent from 1969-85.

Carlson also served on the board of administration of the Pentecostal Fellowship of North America; the advisory committee of the Pentecostal World Conference; the executive committee of the board of administration of the National Association of Evangelicals; and the executive committee for the Religious Alliance Against Pornography. Carlson was the author of some 15 books, including "Preparing to Teach God's Word," "The Life Worth Living," "Spiritual Dynamics," and "Our Faith and Fellowship." He also wrote countless articles.

He preached internationally as well as across the United States and Canada. His ministry took him to many Eastern European countries after the fall of communism.

Show Me Thy Glory

Committed to the Church

Used by permission of Gary Carlson.