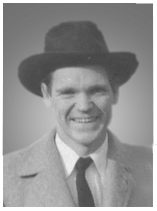 Rev. H. Richard Hall was born in Canton, North Carolina, and preached the Gospel for more than 60 years.

Brother Hall preached his first sermon as a very young man. Standing barefooted, in a distinguished preacher's pulpit, in the state of North Carolina; he preached his first message: "How shall ye escape , if ye neglect so great a salvation?" This drew sinners to an altar of repentance.

Upon moving to Cleveland in 1952, he founded the United Christian Church and Ministerial Association, and to this date has licensed and ordained over 30,000 ministers worldwide. The annual Camp Meeting - Convention in Cleveland has been a well-attended event in the city for many years.

Brother Hall (as he preferred to be called) remained president of UCCMA until his death. He founded the United Christian Bible Institute and the Shield of Faith quarterly periodical. He authored two hardback book Chosen, Elected and Ordained and Spoken Word: The Sign-Gift Ministry.

He was a frequent radio and television personality. He was the featured evangelist in the Raise the Dead, an award-winning documentary. He was also featured in Patsy Sims' book, Can Somebody Shout, "Amen?" and David Edwin Harrell's historical account of the Healing Movement, All Things Are Possible.

Prepare to Meet Thy God

Used by permission of Don Warren.