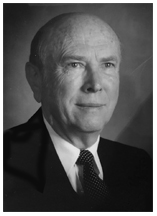 Hardy Steinberg was born on January 25, 1918 in China His parents were Assemblies of God missionaries, C E and Ida Steinberg. When he was five they moved back to the United States. His aunt, Anna Ziese, remained in China, under the most difficult circumstances, until her death in 1969.

He earned his baccaluarate degree at Central Bible College and a masters at Southwest Missouri State University. He was given an Honorary Doctorate in Theology.

In 1942 Steinberg married Francis Hatfield, a teacher at Zion Bible Institute. Together they pastored several churches.

Steinberg was the national director of the Assemblies of God Division of Christian Education. In that capacity he directed the Education and Church School Literature departments and the Berean School of the Bible. He oversaw ten accredited colleges and a graduate school, a number of Bible institutes, and hundreds Christian Day Schools. Steinberg was editor of "Paraclete," an Assemblies of God journal concerning the person and work of the Holy Spirit. He wrote numerous articles for various publications and is the author of "Adult Worker's Handbook" for Sunday school teachers and "Church of the Spirit," a study of the church as described in the Book of Acts. For five years he was editor of "Pulpit," a magazine for ministers.

Three Prayers for You