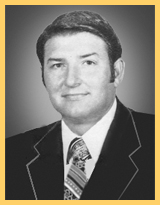 Harvey Wampler was born October 12, 1945, in West Texas in the farming town of Ralls.  He was raised to become a fourth generation Pentecostal by an Assemblies of God Family.  He married an A/G girl with similar background.  Harvey and Carolyn entered in ministry in 1968 and began pastoring at Bethel Assembly of God in a cotton field near Ackerly, Texas.

Their ministry carried them to Glad Tidings Assembly of God, Plainview, Texas, then to First Assembly of God, Morton, Texas. Harvey then became the West Texas District Youth President after having served 3 years as District Vice President.  For four years he served in the District Office and preaching in most of the West Texas A/G churches.  Preaching many revivals during his early pastorates and in District Ministry spawned his evangelistic calling.

The Wamplers resigned their District Youth Ministry to become pastors at Sunnyslope Assembly of God in Phoenix, Arizona, where they were extremely busy preaching funerals, weddings, counseling, area revivals and physically fighting spiritual battles.  Spiritual warfare became very real in their future ministry.  Two years in Phoenix was an education of its own.

Returning for a brief stop in West Texas with revivals scheduled ushered them into the state of Oklahoma where they became pastors near Seminole at the Little Assembly of God in a field of Johnson grass and rag weed. That pastorate lasted only seven months with allergies shutting down Harvey’s voice.

An immediate move to First Assembly of God in Eakly, Oklahoma, was the relief and advantage. Next, Baxter Springs, Kansas First Assembly of God contacted the Wamplers and invited them to become their pastors. Harvey says that he crawled around those alters and pulpit in Baxter Springs seeking for the dying embers of any Pentecostal experiences or possibilities that might have been left behind from the Charles Parham days.

Six years later, they left their children and Baxter First behind as they entered several years of evangelistic revivals in the central and mid-western states.  During their career the Wampler’s have held more than four hundred revival meetings.

Returning to pastoring, the Wamplers became lead pastors in Chouteau, Oklahoma. They then returned to Baxter Springs where Harvey served as assistant pastor for two years at Spring River Assembly in Riverton, Kansas.

Rockdale, Texas became their next ministry at First Assembly of God.Harvey and Carolyn’s parents’ physical needs caused them to move back home to their roots in Lubbock, Texas, where they planted a new church in  Shallowater, Texas. Ten years later they chose to retire and move to Commerce, Oklahoma, to be near their daughters and their families. Harvey received his “50 Year Ordained A/G” minister recognition.

Still not retired, the Wamplers are serving as interim pastors at First Assembly of God in Quapaw, Oklahoma.

He Brought Me Out

King of the Saints

Used by permission of Harvey Wampler.