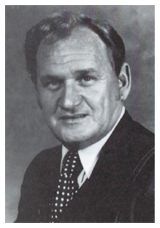 Howard Dennison Burroughs was born on February 22, 1933 in Houston, Texas.

Howard loved sports and found himself in a season where he was playing semi-pro baseball and often missing church on Sundays. Having been raised to know the truth of the Gospel, Howard faced a pivotal point in his walk with Jesus. He and his dear friend, James Bridges, attended a revival together and both Howard and James made the decision to rededicate their lives to the Lord. Howard even went on to sell his baseball cleats and glove in response to the call of the Lord to strip away every weight and run his race with all possible endurance.

Howard served his country as a corporal in the army in Anchorage, Alaska during the Korean War from August 1953 until June of 1955. Not long after his return, he married his Margie, the love of his life, on January 28, 1956. Howard and Margie moved to Waxahachie, TX so he could attend Southwestern Assemblies of God College. He graduated in May of 1958 and was ordained as a minister by the Assemblies of God the following year.

Brother Burroughs met Jesus face to face in May 2018 after a long and happy life.

A Drink from Bethlehem’s Well

After the Baby Came

From the Bottom to the Top

God of the Second Chance

He Will Do What He Said He Will Do

How to Act in Church

See That Your Heart Be Not Troubled

The Holy Spirit Will Lead into All Truths

You Can Still Touch Him

Used by permission of Howard Burroughs.