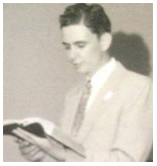 Jack Brooks Linney was a graduate of Sam Houston High School class of 1941 and Texas A&M University. He was veteran of the US Army with service during World War II.

Brother Linney served the Assemblies of God for more than fifty years. He was a pastor and district official. In April 1993 he was made an honorary presbyter of the South Texas District.

Brighten the Corner Where You Are

Joseph: The Testing of Our Faith

The Greatness of God

The Promise of His Coming

What Happens when a Person Dies

Used by permission of Steve Linney.