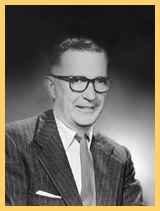 James Robert Ashcroft was born on December 1, 1911 in Philadelphia, Pennsylvania. His father was miraculously healed after being seriously injured in a gasoline explosion. Testifying of God’s power the Ashcroft’s became Pentecostal evangelists sharing the good news from Rhode Island to Florida.

J Robert was called to preach at a young age and was ordained by the Assemblies of God on October 5, 1932. His first pastorate was in Chicago where he also taught at the Great Lakes Bible Institute lead by P. C. Nelson.

Ashcroft’s next assignment was in Hartford, Connecticut. While serving this church he earned degrees from Connecticut State Teachers College and New York University.

In 1948 Ashcroft took at teaching position at Central Bible College in Springfield, Missouri. He was involved in Assemblies of God higher education for the next 45 years. He was the president of Central Bible Institute, Evangel College, Valley Forge Christian College and Berean College.

Ashcroft was involved in many civic activities and denominational boards. He was a prolific author and camp meeting and council speaker. His legacy however was his emphasis on prayer.

Dr. Ashcroft passed to glory on January 5, 1995, one day after watching his son John sworn in as a United States senator. The senior Ashcroft anointed his son with oil and symbolically passed the mantle of family leadership to a new generation.

Leaning on His Bosom

Teach Us to Pray

The Necessity of Intimacy among Believers

Used by permission of John Ashcroft - granted on October 5, 2022.