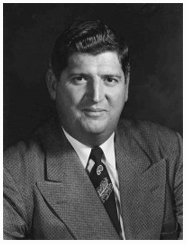 Jack G. Coe was one of the great healing evangelists of the twentieth century. He had the world's largest tent, preached on more than 100 radio stations and published the Herald of Healing magazine that reached 350,000 homes. Many outstanding miracles accompanied his ministry.

Coe started his work in the Assemblies of God, but reached the height of his popularity as an independent evangelist. He founded and pastored the Dallas Revival Center, and opened a faith healing home and a large orphanage in North Texas. Coe's methods, though successful, were quite controversial. Once he was arrested and then acquitted for practicing medicine without a licence.

In 1956 Coe was stricken with polio and died suddenly at the age of 38.

Be of Good Cheer

Detour on the Road to Hell

Do It Again Lord

God Will Set Your Fields on Fire

If Thou Canst Believe

Wilt Thou Be Made Whole

To visit the website of Jack Coe, Jr. and purchase the sermons of Jack Coe, visit jackcoe.org by clicking here.

Used by permission of Frieda Coe.