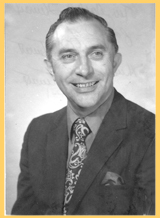 Jack Arther Stewart was born into a Pentecostal pastor’s home on August 16, 1928. He suffered a severe digestive illness as a child but he was healed after a lady prophesied that the devil was trying to kill him but God would make a preacher from him.

Jack was saved as a boy but backslid as a teen. After contracting typhoid fever at age nineteen he recommitted his life to the Lord. At age 20 he accepted the call to preach. He served the Lord as an evangelist and pastored churches in Michigan, Ohio, and Indiana.

His greatest life work was in New Life Fellowship a church he founded in Indianapolis, Indiana. Brother Stewart hosted a radio program he called “The Fountain of Life”. He travelled to the Holy Land where he was blessed to preach in Jerusalem and also preached in the jungles of Peru.

Jack was a musician, a songwriter and an author, but the most outstanding feature of his life was that he lived in the Word of God

Brother Stewart graduated to his heavenly home on December 31, 2001.

New Age or End of Age

Salvation by Faith through Grace Plus

Used by permission of Carla Stewart.