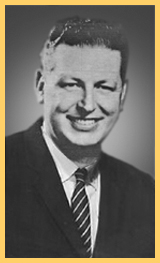 Jack West was born in a log cabin in Bruce County, Ontario, near the village of Underwood. His father died four weeks before his birth. His widowed mother with his sister, Marion, and his brother, Bill, moved to the town of Clinton; where he grew up and received his education.

At seventeen, he received Christ as his personal Savior, and at 19 was baptized with the Holy Spirit under the ministry of Charles Price, and was called to preach the Gospel. He served 42 months in the Royal Canadian Medical Corps during World War II.  A highlight of his life during his military career was when he stayed in the home of Smith Wigglesworth who had prayed over him that God would make this young man an "extraordinary" Son. God...and that he was!

Jack served five churches in pastoral work in Hamilton, Ontario; Springfield, Missouri; South Bend, Indiana; St. Catherine’s, Ontario; as well as ministering in sixty Camp Meetings, and preached all across Canada, the United States, and in over thirty countries and five continents around the globe. Thousands came to Christ and received the baptism in the Holy Spirit in his meetings.

He was an honorary board member of Church- Growth International, directed by David Cho in Seoul, Korea; and ministered several times in that great church. In 1991, he was awarded an Honorary Doctorate. Jack. West felt so privileged to have ministered on numerous occasions for Rev. David Wilkerson and Pastor Carter Conlon at Times Square Church in New York City; where he also considered that great and loving church to be his "home church."

Jack West was a very gifted artist, poet, and had authored ten books. His last book, Ministering the Spirit was released shortly before his death Brother West went to his eternal reward on Sept 22, 2001.

Jack West's passion was always to win souls for Christ.

Ten Words That Changed My Life

The End of the Harvest

Used by permission of Sharon Burdine and Cynthia Wormald.