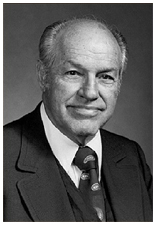 James E. Hamill was born April 15, 1913, in Pughs Mill, Mississippi, to Mr. and Mrs. James N. Hamill, a timber contractor. His father died when young James was only six years old, and he learned early about accepting responsibility and managing in tough times. At the age of 17, young Hamill felt a definite call from God to preach the Gospel. It was a difficult decision for him to make because he had determined to care for his widowed mother. However, as God dealt with him, he made a total commitment of his life to Christ and began to preach in that same spring of 1930.

The ministry of this young preacher-boy began inauspiciously in the little country churches near his Mississippi home. Those who knew him at that time would have never dreamed of the international influence which would result from the commitment of young Jim Hamill. God certainly had his hand in the early formation of a Champion for Christ. His ministerial career took him into every part of the nation as an Evangelist. Early in his ministry, Hamill pastored in Columbia, Tennessee; Hattiesburg, Mississippi; Hope, Arkansas and Okmulgee, Oklahoma.

James preached at every type of meeting known to the Assemblies of God, including Minister's Retreats, Conventions for Youth or Sunday School, Council meetings and Seminars. He conducted meetings in many mission fields and traveled in over 70 countries of the world, including the Soviet Union (1958) and Red China (1981).

Central Bible College awarded him an honorary Doctor of Divinity degree in 1976; he was the only pastor to ever receive such an honor in the school's (then) 61 year history.

He served on numerous boards and committees, both religious and civic, through the years. He became a towering influence for righteousness throughout the mid-south. However, Dr. Hamill's greatest love in ministry was First Assembly in Memphis, Tennessee, which he served as Senior Pastor for thirty-seven years. First Assembly grew from around 100 people to a membership of more than 2,000. The church became one of the great missions churches in the nation.

Hamill was a pioneer in utilizing radio and television to spread the message of Jesus Christ.

Brother Hamill never forgot his humble beginnings. He always had a place in his heart for the pastor of the smaller church and for the beginning evangelists. He loved young people and was a popular guest every semester at Central Bible College where they named a chair for him, The James E. Hamill Chair of Pastoral Theology.

The Road to Success