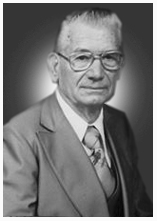 Moon was a pioneer Pentecostal preacher. He would be led by the Spirit to a certain city and then hitchhike there to plant a church.

Used by permission of Sheree Moon.