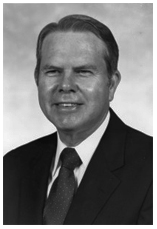 Jim O. McClain was an ordained bishop of the Church of God and had served in denominational leadership until his retirement in 1989.

As a pastor, he generously supported foreign missions and was known for supporting missionaries. This led to his subsequent service for 18 years in Church of God World Missions.

For eight years he was a missions representative, traveling from church to church to encourage support for missionaries and missions projects, visiting hundreds of congregations across the country. He then served for six years as field representative/assistant director, rising finally to be elected the general director of World Missions.

Following his missions ministry, he was state administrative bishop in South Georgia, returning to the pastorate before his retirement.

His extensive travels and knowledge of the fields where the church was established, his acknowledged preaching ability and his genuine compassion made him ideal for the missions leadership. He was widely known and greatly respected for his generous heart, his enthusiastic leadership and his spiritual passion.

Brother McClain joined the host in Heaven on Tuesday, July 7, 2009.

The Perfect Will of God