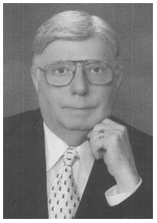 Jimmy Phillips recieved his first ministerial credentials at age 17. He was ordained at 23. Jimmy served twenty-one years as a pastor and thirty years as an evangelist.

He has traveled in 50 countries and has preached at the world's largest church, in Seoul, South Korea. The pastor, Dr. Paul Yonggi Cho said, "Jimmy Phillips openly shares his heart, goals and compassion for the billions of people around the globe."

Jimmy has written three books and has appeared on numerous national and international religious television shows.

Today, Brother Phillips teaches a prophecy seminar at the Ambassador Hotel in Amarillo, TX and has a weekly television program that reaches into twenty nations.

The Four Horsemen – Part One

The Mark of the Beast – Part Four

The Mark of the Beast – Part One

The Mark of the Beast – Part Three

The Mark of the Beast – Part Two

The Mother War – Part One

The Promised Land – Part One

Why Bible Prophecy Is Important – Part One

Used by permission of Jimmy Phillips.

If you want to order more sermons from Jimmy Phillips, you may contact him at 6210 Camden Lane, Amarillo, TX 79109