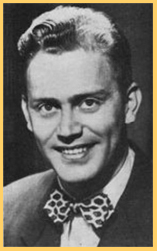 John Edward Garlock was born on January 4, 1924. He was the son of pioneer Pentecostal missionaries, Henry and Ruth (Trotter) Garlock. John himself became a missionary with the Assemblies of God. He served in South Africa and at the Continental Theological Seminary in Brussels Belgium. Garlock also served at Christ for the Nations Institute fo r 29 years. He and his wife Ruthanne also traveled and taught leadership training throughout the US and in 35 other countries.

Garlock  served as a departmental editor for the Pentecostal Evangel and the editor of Global Conquest and The Missionary Forum. He was a prolific writer, publishing dozens of articles and several books including Keys to Better Preaching, Teaching as Jesus Taught and Our World Witness. On a lighter note, he also co-authored but was not credited for a whimsical look at the story of the prodigal son, Melody in F.

Brother Garlock with to be with Jesus on December 6, 2003.

Used by permission of Ruthanne Garlock.