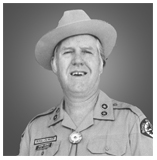 Johnnie Barnes was born August 16, 1927. He was ordained by the North Texas District of the Assemblies of God in 1950. He served as an evangelist for seven years before pastoring in Electra, Texas He also served as North Texas CA President.

In 1962 Barnes founded the Royal Rangers, an Assemblies of God scouting program for boys. By the time of Barnes death more than one million boys had been involved in Royal Rangers. There more than 125,000 active members in the United States meeting in 5,290 different churches. The program also operated in 43 nations around the world. He served as National Commander of the Rangers.

Johnnie was also an accomplished song writer, artist and the author of fourteen books. He was the senior editor for High Adventure, the national Royal Ranger periodical. Barnes travelled throughout the United States and in 26 countries promoting Royal Rangers.

Commander Barnes passed suddenly from a heart attack on June 15, 1989.

Introducing Men and Boys to the Holy Spirit

Used by permission of Ernest Patterson.