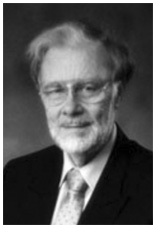 E. Judson Cornwall was born August 15, 1924 in San Jose, California. He was a prolific Charismatic Christian preacher, pastor, and author of over 50 books on varied subjects such as worship, praise, spiritual warfare, and death.
A third-generation minister, Judson Cornwall was preaching at the age of 7 during the Depression era, and later was regarded as an apostle and pioneer. Cornwall was ordained by the Assemblies of God in 1948. He pastored churches in the West. He resigned from the Assemblies of God in 1976 and ministered worldwide for more than 20 years, preaching, teaching, and training ministers and laity of various denominations. Three of his books, Let Us Worship, Elements of Worship, and Let Us Praise, are widely considered Christian classics.
Pastor Cornwall’s was diagnosed with cancer in 2001 but he continued to minister even from a wheelchair. His last book was Dying with Grace, which he did on February 11, 2005.

Used by permission of Terri Gargis.