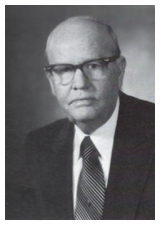 Kermit Reneau was called into the ministry at 14 years of age and ordained in 1939.

Although raised in the Baptist Church, he dedicated his life to the ministries of the Assembly of God, serving as pastor at numerous churches from 1939-81, most notably, the First Assembly of God in San Antonio from 1948-53, and again from 1961-69.

He was one of the original directors of Woodforest National Bank where he was recognized as the oldest living bank director in the state of Texas. He also served on other boards, such as Lyondell Bassell, Christian Fidelity Insurance and Hospice Care Team, to name a few. He had a passion for building churches, helping finance over 2,000 churches in his lifetime.

He was also an active philanthropist in the North Channel area, investing in businesses and organizations, watching them grow and succeed. Among them was the North Channel Coalition, a shelter for abused women and children.

Need for a Foot Washing

Results of Your Faith

Used by permission of Josh Reneau.