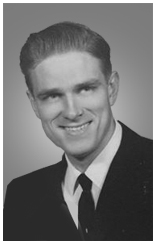 An accomplished pianist and singer, Larry began his ministry as an evangelist. He traveled for eight years, mostly in Oklahoma, Texas and Arkansas.

Perhaps he saw his greatest ministry success as a pastor. He filled that calling for almost 37 years. A highlight of that ministry was two successful tenures in Chickasha, Oklahoma, not far from Marlow, Larry's Southern Oklahoma boyhood home.

A prolific writer, Larry has seen dozens of articles published in The Pentecostal Evangel and other periodicals. He has also enjoyed writing for newspapers and broadcasting on radio.

Larry was called home to his eternal reward on December 17, 2017.

A King in a Cave

All in How You Look at It

All Things Are Possible

Are We Missing Something?

By the Will of God

Do We Trust Him

Faithful to the End

God Is Not Slack Concerning His Promises

He Brought Me Out

Healing of the Memories

His Plans – My Plans

How to Have Faith

How to Stay Focused

I Am Now Ready

I Will Be with You

Know What You Are Called to Do

Know Who You Are?

Knowing How to Work with Others

Meeting God in the Narrow Places

One Day at a Time

Power from on High

Questions Some People Are Asking

Strategy for the Last Days

The Book – The Blood – The Blessing

The Book of Job

The Challenge of Motherhood

The Day of Christ

The Lamb of God

The Mind of Christ

The Notable Works of God

The Presence of the Lord

The Purpose of Testing

They Have No Wine

We Are at War

What Are We Saying to the World?

What Every Father Should Tell His Child

When Is it Truly a Move of the Holy Spirit?

When Life Makes No Sense

Where Are the Dead?

Why We Celebrate Christmas

Used by permission of Larry Hatfield