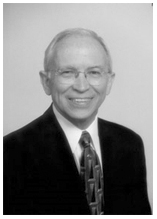 Loren Triplett was a pastor in Nebraska when he felt the call of God to missions. He and his wife were appointed and arrived in Nicaragua in 1954. For the next 12 years they evangelized, planted churches, directed the Bible school, and wrote and published Spanish literature.

In 1966 Loren was appointed director of Editorial Vida (later renamed Life Publishers), the Spanish literature department for World Missions in the Assemblies of God. Seven years later he was asked to serve as regional director for Latin America and the Caribbean, a post he held for 16 years.

Brother Triplett went to be with his Lord on Christmas Day, 2016. He had been retired in Springfield, MO for several years.

Measure against the Need, Not the Success

One Body, One Mission

The Call of God

Committed to the World

Used by permission of Loren Triplett.